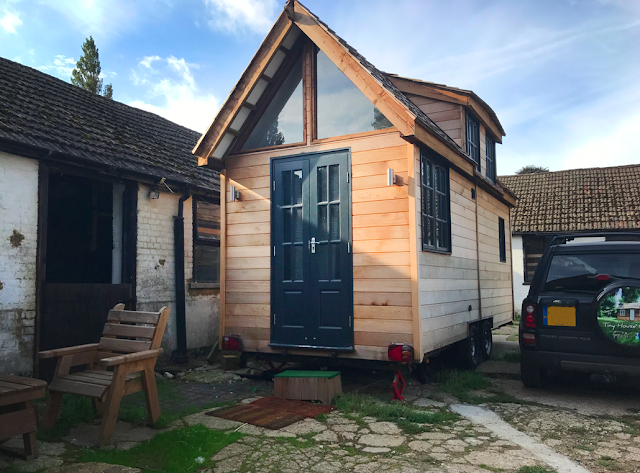 A great offer from Mark Burton of Tiny House UK. Here's what he says about it:

This Tiny House is about 4 years old and I have been living in it for nearly 3 years.  The roof tiles and cladding have weathered down now which gives it the silvery colour instead of nearly orange like it was when it was first built (see photo taken in the field). The roof tiles and cladding is Western Red Cedar, one of the so called “Super woods” which makes it very tolerant of weather as cedar contains its own oils so doesn’t necessarily need treating. I’ve made some changes to the original build ie: the downstairs windows are lockable UPVC.

Approx. 17 foot chassis, just under 4 meters high and 8 feet wide. It has a mini kitchen, which includes a sink with drainer, 2 electric hotplates with timer, microwave and fridge freezer. There is also an Oven/Grill with additional double hotplates included. There is a “left/right” storage ladder to access the sleeping loft, which doubles up as shelves for jeans and T-shirts. Behind the ladder are 2 hanging rails for items of clothing on hangers. The bed is a full size double with a single opening window at one end and two opening windows at the foot of the bed.

Under the bed is the shower room with a 800mm shower tray, wall mounted thermostatic shower mixer and glass bi fold door. Next to the shower is a modern composting WC with soft close seat and extractor fan.

At the front of the cabin adjacent to the French doors is a seating bench with 3 storage draws below. The flooring is “Rustic Oak” engineered hardwood flooring. The main heater is a glass fronted 2000 watt Wi-Fi controlled heater wall mounted under the sleeping loft.  The second heater is wall mounted on the opposite wall next to the WC making the shower room a kind of drying area for your washing. As heat rises, both heaters do a great job of heating up the sleeping loft so you have a nice warm mattress to sleep on.