Does social media give you tiny house envy? 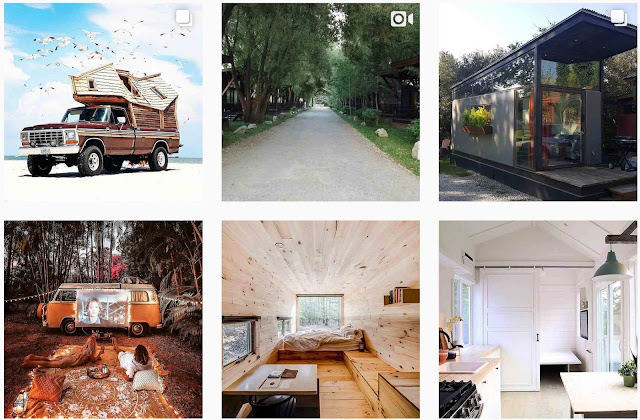 While there are more people using Instagram for interiors inspiration than ever before, more than 50 percent of UK Instagram users feel dissatisfied with their homes after looking at images of other people’s houses on social media, a study has found.

Researchers who polled 1,500 UK adults using social media for inspiration with their homes, found that less than a third of people are completely satisfied with the appearance of their current home.
However, more than 80 percent of those who are displeased with their home admit to feeling this way once a month or more after scrolling through other properties on Instagram, with 25-34 year olds feeling dissatisfied most frequently.

One in ten admitted to feeling critical of their own home several times a day after comparing with other properties on Instagram.

The findings describe people having an unrealistic idea of what their home should look like, spending time worrying about flaws which would be unnoticeable to others, whilst feeling pressure to maintain a certain appearance in their home and being self-conscious of it in front of visitors. This mindset has been described by Chartered Psychologist, Dr David Lewis, as ‘Home Dysmorphic Disorder’ (HDD).

“Our home is our shop window to the world," he said. "An outward and visible display of the way we want others to see and judge us. This is challenged when we are exposed, especially through social media such as Instagram, to the choices of others. The more comparisons we are able to make with the ways others present themselves to the world, the greater the dissatisfaction we may feel with our own surroundings. The more individuals worry about what friends, neighbours, and colleagues think of them, and this is more likely to be a concern for younger than older people, the greater their dissatisfaction. It is an increasingly common mindset that can be described as ‘Home Dysmorphic Disorder’ (HDD).”

The phenomenon effects both genders but women are most at risk of developing HDD, 22 percent more likely to be affected by this, compared to men.

Young homeowners are most likely to be dissatisfied with their homes after looking at images of other people’s houses on Instagram, with 18-24-year olds being found to be most unhappy with their homes.

Commissioned by door and window brand Origin, the survey found that many people have taken steps to make their home look more ‘Insta-worthy’. These include changing the interior, purchasing home accessories specifically because they will look good on Instagram and feeling pressure to be tidier than they used to be to maintain an Instagram look.

Many have even spent money in a bid to recreate an ‘Insta-Home’, with UK residents spending an average of £411 on their homes as a result of being inspired by the social media platform.