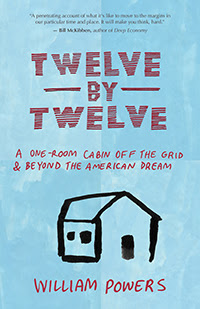 Subtitled 'A One-Room Cabin Off the Grid & Beyond the American Dream', this is a personal account by William Powers of exploring the tiny home lifestyle. Here's the publisher's blurb:


Why would a successful American physician choose to live in a twelve-foot-by-twelve-foot cabin without running water or electricity? To find out, writer and activist William Powers visited Dr. Jackie Benton in rural North Carolina. No Name Creek gurgled through Benton’s permaculture farm, and she stroked honeybees’ wings as she shared her wildcrafter philosophy of living on a planet in crisis. Powers, just back from a decade of international aid work, then accepted Benton’s offer to stay at the cabin for a season while she traveled. There, he befriended her eclectic neighbors — organic farmers, biofuel brewers, eco-developers — and discovered a sustainable but imperiled way of life.
In these pages, Powers not only explores this small patch of community but draws on his international experiences with other pockets of resistance. This engrossing tale of Powers’s struggle for a meaningful life with a smaller footprint proposes a paradigm shift to an elusive “Soft World” with clues to personal happiness and global healing.

Also worth a look is his follow-up book New Slow City:

Burned-out after years of doing development and conservation work around the world, William Powers spent a season in a 12-foot-by-12-foot cabin off the grid in North Carolina. Could he live a similarly minimalist way in the belly of the go-go beast — New York City? To find out, Powers and his wife jettisoned 80 percent of their stuff, left their 2,000-square-foot Queens townhouse, and moved into a 350-square-foot “micro apartment” in Greenwich Village. Downshifting to a 20-hour workweek, Powers explores the viability of Slow Food and Slow Money, technology fasts and urban sanctuaries, rooftop gardening and beekeeping. 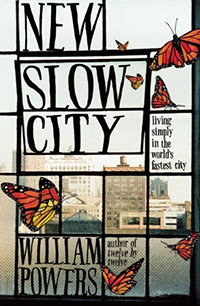